Tools of the Trade: Email Marketing with Sendy

By Jeff Hawkins. Tools of the Trade

The email marketing application Sendy is our favorite solution for sending group emails, thanks to its affordability and ease of use.

At Eucalypt Media, we have always appreciated when peers have taken the time to share some of the tools and services they have found helpful in running their businesses. Now we have decided it is time for us to do the same. So to that end, we are starting a series of posts showcasing some of the tools we use in-house to get things done.

First in line is Sendy, a self-hosted email marketing application by Hex, a Singaporean husband and wife development team, that uses Amazon SES (Simple Email Service) to deliver email campaigns at a fraction of the cost of competing services.

Our problem: Finding an affordable email marketing program for a bootstrapped side project

In 2009 we purchased Gimundo.com, and inherited with it an almost 25,000 subscriber mailing for Gimundo’s daily good news email newsletter. The list had been unused for more than six months by that point, so in order to keep with email marketing best practices, we knew we needed to make contact with the subscribers sooner rather than later. Sending more than 500,000 total emails per month was never going to be a cheap prospect, and after some research we ended up going with Constant Contact, who offered a plan for $250 per month to send unlimited emails to up to 25,000 subscribers.

The mailing list proved to be quite healthy, which was a pleasant surprise after several months of inactivity. There was only a small number of bounces for the first mailing and a 35% open rate, which was great to see. The downside of this success was that we were looking at paying $3000 per year for email marketing on a side-project that we were bootstrapping and had limited revenue at that point.

We ended up pruning the list heavily over the next couple months, creating segmented lists of users who appeared to never open our messages and then giving them a one-time message to re-confirm their interest in our mailings. This allowed us to avoid removing subscribers who were opening our messages, but not having it reported by Constant Contact. Within three months, we had cut the list to a much more manageable 10,000 subscribers and reduced our costs to $75 per month. Another positive from this was that our open rates trended more towards 40-50% for each mailing, which is a great response by any industry measure of success.

Over the next couple of years we investigated numerous email marketing provides including Campaign Monitor, Vertical Response, MailChimp & Emma. Some offered beautiful interfaces and great tools, but ultimately were far too expensive, while others were priced similarly to Constant Contact, but offered no real incentive to make the move.

Then in mid-2012, I came across an online ad for a new email marketing application promising to deliver for a fraction of the cost of the other providers, with a discounted price to promote the launch. The $40 price seemed well worth the gamble if the savings promised were actually realized, so I was quick to take the plunge (apparently very quick, as the developer mentioned to me during a support request email that I was Sendy’s first paying customer).

Unlike the previously mentioned services, Sendy is self-hosted software, meaning that it needs to be installed on your own server. The minimum server requirements for Sendy are not particularly advanced, and although most shared hosting setups will make the grade, I would advise against it as they will often have their processor and RAM usage throttled and may not perform well. A VPS or dedicated server with a reputable host will have no problems running the software at all.

Installing Sendy is fairly straightforward, and to get the advantage of cheap bulk email delivery you will also need to have an Amazon AWS account (you can use your regular Amazon account to log in if you have one). Depending on the number of domains that you intend to send mail from, the whole process should take less than an hour to have Sendy up and running. I won’t go into the specifics of the actual installation process–if you have experience installing web software on a server the instructions provided are easy to follow. If you are not comfortable doing it, hiring a developer for the task shouldn’t be an expensive proposition.

To avoid their servers being used for spam, Amazon “sandboxes” all new SES accounts, which limits your sending capacity significantly. You can request production access (the ability to mail to your list) and a sending increase, but it is critical to make sure that the lists you send to are fully opt-in, as an unreasonable (as determined by Amazon) number of bounces or spam reports will see your account shut down. This type of approach is by no means unique to Amazon, and all of the major email marketing services have similar policies.

Once you have finished installation and logged in, Sendy’s interface is clean, attractive and simple to navigate. You can add unlimited “brands”, along with an unlimited number of mailing lists for each of them. Importing lists is simple using a CSV file, although large lists in the tens of thousands or higher, may need to be broken up depending on your server capabilities, or you can import them via a cron job. You can also add single entries manually through the interface any time. There is the option to create unlimited custom fields, which makes personalization of each email a breeze. Sendy auto-generates the code necessary for a basic sign-up form that you can add to your website, and there is a constantly improving API for more advanced integrations to cover most usage cases.

There are a couple of ways to create your email campaigns. You can use the WYSIWYG tools to create a formatted text email with images and attachments. Alternatively if you have a more elaborate HTML message, you can past in the code directly. There are provided tags that you can use to provide one-click unsubscribe and links to web versions of each email. Once the email is complete, you can send test versions to one email address at a time until you are satisfied with the outcome, and then you can schedule the campaign, or send it straight away.

Sendy has three modes for sending mail. The primary method is via Amazon SES, and this is where the real cost savings come in from other mail services. You only pay $0.10 per thousand recipients—in our case for Gimundo, each mailing to our list of approximately 10,000 costs $1. (As our agency has grown, we’ve had less time to dedicate to Gimundo, but we plan to relaunch the site and mailing list in the New Year with Sendy’s help.)

The second method is via SMTP. For example, you can enter your Gmail SMTP credentials and have your mail campaigns go through Google servers instead. This method doesn’t cost anything, but you are generally capped in the number of messages you can send per day.

The final method is via your server, and is a fallback if none of the other methods are configured. This option is not recommended, and may not work depending on your server configuration and permissions. Additionally, your hosting provider may have strict limitations on mail sent through the server.

As long as you have sufficient computing power with your server and a large enough sending quota from Amazon, there is really no upper limit to how big a mailing list can be. On the Sendy forum there is plenty of anecdotal evidence of subscriber lists in the hundreds of thousands, and even a couple mentions of lists in the millions. 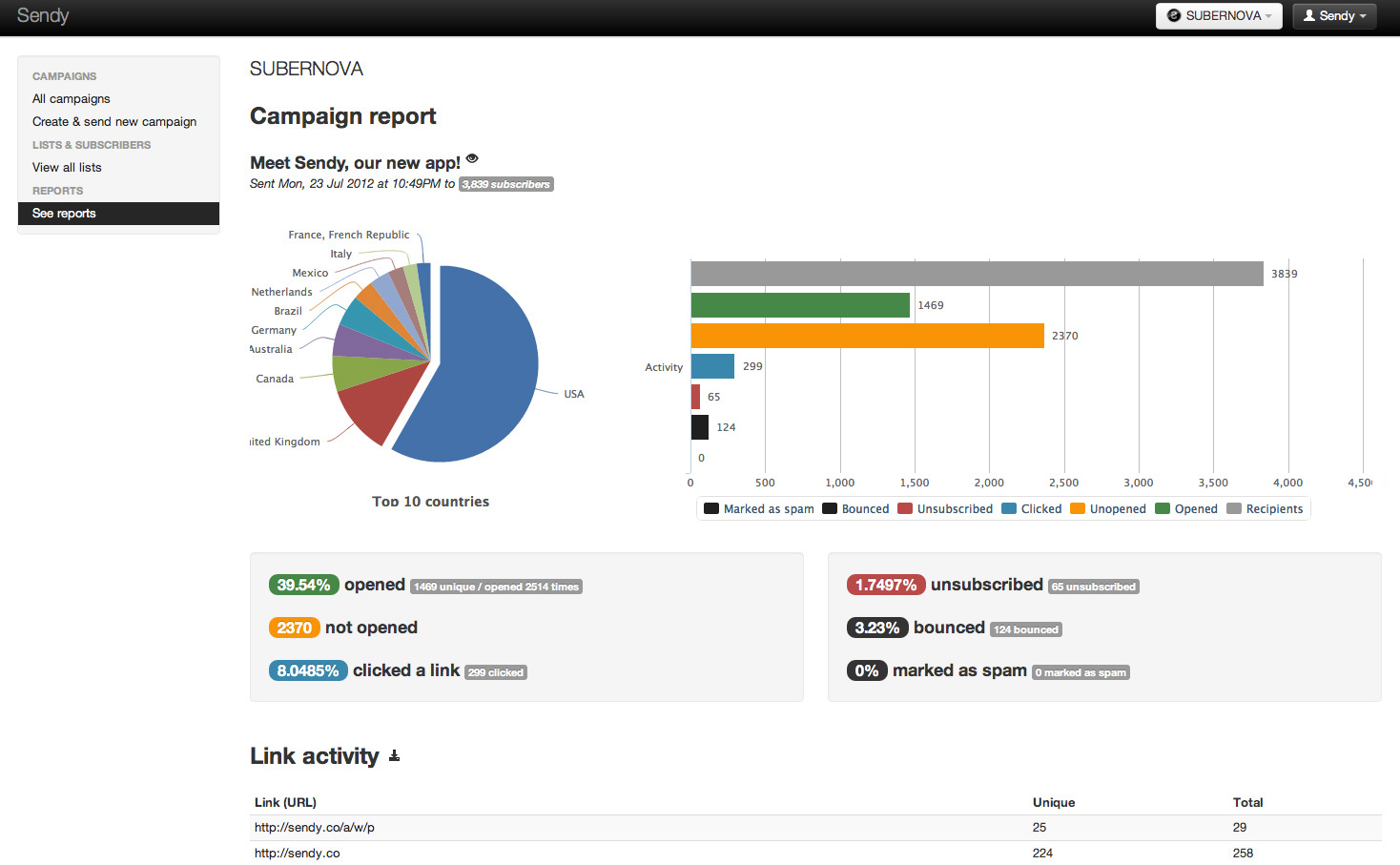 Once each campaign is sent, you can track the opens, bounces and spam reports in real time. You can see graphs showing the geographic locations of recipients along with precisely what links have been opened and how many times. You are also able to download lists in CSV format for each email campaign, such as those who opened the message, unsubscribed, or reported as spam. Sendy takes care of some tasks for you automatically, such as flagging recipients who unsubscribe or report your email as spam so they can no longer be mailed to again.

Sendy offers many other features that I haven’t had a chance to touch on, such as autoresponders and the ability to have your clients pay to send their campaigns through your installation, so feel free to visit the company’s website for a more comprehensive overview of its offerings.

It is clear that the developer stands behind Sendy and is invested in its future. Since its launch two and a half years ago, it has seen 24 incremental upgrades along with the addition of many new features. He is constantly active on the support forum and very responsive to feature requests. Personally, I would love to see a “Forward to a friend” tag added, along with the ability to be able to set the sending method on a brand-by-brand basis.

A single installation license for Sendy currently costs $59 and includes all upgrades up until the next major version (i.e. Sendy 2). At Eucalypt Media, we have used Sendy to successfully send hundreds of thousands of emails, for both our own and client projects, and it is an investment that has no doubt paid for itself many times over.

Disclosure: This post contains affiliate links, which means that if you click on one of the product links and make a purchase we will receive a small referral commission.

Jeff Hawkins has over 20 years of experience as a website developer and marketing consultant, developing websites and managing web content for clients including the National Wildlife Federation, National Fish and Wildlife Foundation, and Theodore Roosevelt Conservation Partnership. A co-founder of Eucalypt, he focuses on business development and technological consulting for clients.

Latest from the Blog

Receive monthly tips on content marketing, social media marketing and how to improve your company’s web presence. No spam. Ever.